HOME Components: The Solar Panel is Only the Beginning

Components: The Solar Panel is Only the Beginning 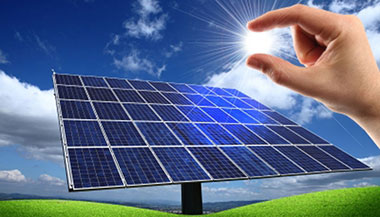 Components: The Solar Panel is Only the Beginning

A properly installed and maintained system not only saves you money and gives you energy independence, but is environmentally friendly, too. Solar power panels, or modules, are what most people think of when they think of a solar electric power “system,” although they are in fact just one cog in the system. This guide is a short introduction each component in the system and to help give you a full picture to how the system works to provide clean cheap energy for your home.

light energy into usable electric energy, whereas today’s units can convert some 15-20% of sunlight’s energy.Increasing panel efficiency allows for smaller, cheaper systems, which in turn allows for greater accessibility for varying income brackets as well as physical applications.

The solar power modules (solar panels and other types)

A solar power module, often called a “solar panel”, is essentially an array of many individual solar cells; a module will produce from 50 to 300 watts.

All of the major manufacturers build modules with 35-40 year useful lives. Generally speaking, solar modules of all efficiency ratings from any of the established manufacturers are reliable and offer good return on investment.

A key component in your solar system device chain is the inverter. Inverters modify the solar energy modules’ current and voltage to maximize output, and convert their DC power to the AC power required by most of business and home equipment.

Inverters are rated and compared to one another based on their capacity, their voltage rating and their battery capabilities. Often they are installed along with fuse boxes, switches and other electrical components in a “control center” that relies on certified electrical service boxes. Inverters should typically be mounted in dust-free, dry and well-ventilated areas.

To withstand years of exposure (wind, weather, corrosion, etc.) the solar array has to be solidly mounted. It may appear from street level that solar panels are directly atop a house’s roof, but this is not the case. Mounting on roofs has to take into account the roofing materials, their condition, their future replacement needs and so on. A professional solar installer knows the ins and outs of all mounting alternatives, and you are strongly advised not to jeopardize your home’s roof by going up yourself to nail down some panels.

For long-term stability and efficient operation, there is probably no more important component than the one you probably will see least, the wiring. You will have to follow construction codes as well as the National Electrical Code, and use devices that carry a rating agency certification, as from Underwriters Laboratory (Check with your installer that he/she is up to date with these requirements). Connections can become loose over time from ongoing “rooftop heat cycling,” and this is a common cause of poor system performance, it’s always a good idea to have a plan in place should your system ever experience an issue.

To monitor system performance, it may be useful to install a separate solar power electric meter. Finally, you may also consider a separate “AC disconnect” so you can isolate your solar power from the utility’s power. Your solar power system will likely include a DC disconnect, as well, to isolate your array output from your inverter. If there is a power outage at your utility, your solar system will continue producing power and could actually feed power into the grid while utility crews work to resolve the power outage.

A solar system is a chain of devices that takes power from once source (the sun) and makes it usable in your home. You can think of it as even a kind of organism, taking in fuel and converting it to practical use by way of light bulbs, radios, toasters and other appliances. All of the pieces of you solar power system need to work together, and when they do you are able to reduce your energy costs, help the environment and make a serious contribution to a realistic, sustainable future.